Putting the 'P' in PCR: A retrospective on Taq polymerase and the evolution of PCR 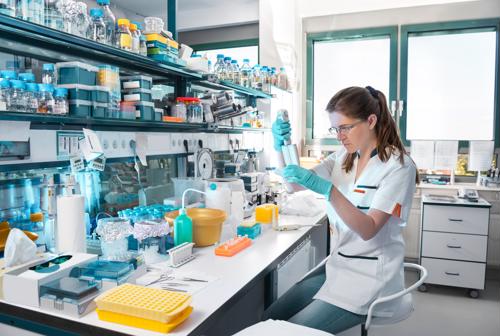 Polymerase chain reaction (PCR) is universally recognized as one of the most important scientific advances of the 20th century. Since its development  nearly 30 years ago, PCR has become widely utilized in applications, from basic scientific research to clinical diagnostic testing to forensic analysis. Even now, PCR technology remains at the cutting edge of next-generation genomic research.
In this article, we will dive into the rich history surrounding the birth of PCR, highlighting some of the significant advancements resulting in its development, and describe the evolution of PCR from its inception, beginning with the serendipitous discovery of our favorite heat-loving bacterium, Thermus aquaticus.

PCR: At a glance
In the 1960s, scientists were fairly certain thermophilic bacteria could not survive the intense 70 degrees Celsius (158 degrees Fahrenheit) temperatures within naturally occurring hot springs. However, careful investigation of hot spring biological organisms revealed many bacteria not only survived, but also thrived in extreme temperatures. In 1969, Indiana University microbiologists Thomas Brock and Hudson Freeze discovered an extreme species of thermophilic bacterium they named Thermus aquaticus at the Lower Geyser Basin at Yellowstone National Park1.

At the same time, researchers in the laboratory of Nobel Laureate H. Gobind Khorana made significant advancements in DNA amplification technology using an artificial system of primers and templates to copy DNA segments using a single primer-template complex 2. Specifically, in 1971, Kjell Kleppe described a method quite similar to PCR in which a two-primer system might result in replication of a DNA segment in one cycle, which could be repeated by adding a fresh dose of DNA polymerase each cycle3. Together, these discoveries marked the beginning of the DNA amplification era and conceptually laid the framework for PCR amplification strategies in the future.

In 1976, Alice Chien and John Trela from the University of Cincinnati isolated and purified a thermostable DNA polymerase from Thermus aquaticus – very sensibly named Taq polymerase – with a temperature preference of 75-80 degrees Celsius 4. Around the same time, Frederick Sanger published a novel method for sequencing DNA in 1977 using an oligonucleotide primer, DNA polymerase and modified nucleotide precursors that prevent primer extension in a sequence-dependent manner 5. Sanger was awarded a Nobel Prize in 1980 for this work. At the time, these discoveries appeared to be of no relation, but together, they would complete the necessary technological pieces for the eventual development of PCR technology.

Indeed, it was in 1983 when Kary Mullis, a biochemist at Cetus Corporation, began devising experiments using repeated thermal cycling to amplify small segments of a cloned gene. Over the next two years, Mullis and a team of Cetus scientists, including Randy Saiki, would hone this process as a method to amplify large quantities of target DNA. These findings were initially presented in 1985 at the annual meeting of the American Society for Human Genetics 6 and published in Science magazine the same year 7. During this time, Saiki began experimenting with PCR using Taq polymerase, and the subsequent use of Taq polymerase in PCR was first announced at a scientific meeting by lead investigator Henry Erlich in Berlin during September 1986. It was later accepted for publication in Science magazine in January 1988 8. This marked the seminal publication of modern PCR and would incite subsequent discoveries and adaptations of this method, changing the landscape of molecular biology for decades to come.

Notably during this time, a joint venture between Cetus and the biotech company PerkinElmer resulted in the design and launch of the first commercially available PCR machine, the PCR-1000 Thermal cycler, and the commercial availability of AmpliTaq DNA polymerase for widespread use in 1988. The importance of these contributions to researchers at that time cannot be understated. Indeed, Taq polymerase was enormously successful, winning Science magazine's "molecule of the year" distinction in 1989, and the original 1988 Saiki et al. publication 8 was the most cited paper in biology for years to follow.

Because Taq polymerase could tolerate high temperatures, it removed the need for laborious manual replacement of fresh non-heat stable E.coli DNA polymerase at every cycle. Researchers could now go out and get a cup of coffee during their automated PCR rather than spend the better part of an afternoon with a timer in front of the water bath, replacing DNA polymerase as many as 40 times. The now widespread availability of a streamlined process for large-scale use meant PCR would blossom in novel research applications across the globe. And it did, and the rest was, in fact, history.

Despite these tremendous initial successes, researchers knew that Taq polymerase was not perfect. It was unstable at very high temperatures and could be error prone, with difficulty amplifying GC-rich areas, which limited some applications requiring high specificity and reliability. These limitations spurred the subsequent development of tremendous technologic advances in PCR technology over the coming years. From the advent of hot-start PCR and development of anti-Taq antibodies to the isolation and development of the proofreading Pfu polymerases, PCR successes continue.

And we have Taq to thank for that.