Standing out from the crowd: Don't fade into the background 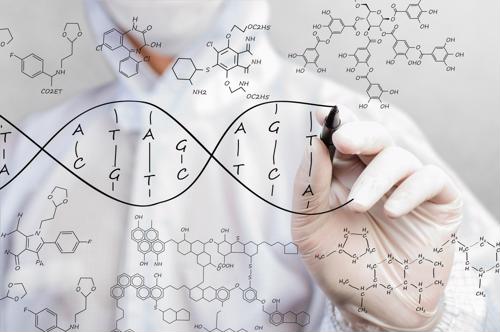 Scientists have long been exploiting the ability to hybridize complementary nucleic acid probes for detection of specific target sequences by filter-based techniques such as Northern and Southern blotting, in situ hybridization methods and more recently, microarray-based gene expression profiling.

Indeed, the development of in situ hybridization techniques published simultaneously by John et al and Pardue and Gall in 1969 was a critical advancement in our scientific ability to detect and analyze gene activity in morphologically intact chromosomes1,2. Importantly, these early studies capitalized on the use of radioisotope-labeled probes and autoradiographic detection strategies. Significant advancements in molecular cloning techniques resulted in dramatic improvement in in situ radiolabeling strategies in the 1980s. These advancements included the ability to detect low copy number mRNA molecules in individual cells3 as well as the synthesis of radiolabeled oligonucleotides for in situ mRNA detection4.

And while the enhanced sensitivity and broad applicability of this technique have made its use fundamental to research laboratories across the globe, there have been significant barriers to more widespread and higher throughput implementation. Namely, the need for radioactive labeling and the associated issues that arise for safety, hazardous waste regulation and disposal, limited shelf life, and limitations in spatial resolution inherent to radioactive decay and autoradiography have presented challenges. This has spurred the development and optimization of non-radioactive alternatives for both filter and in situ hybridization techniques.

Radioactive probes can be rapidly prepared with high label density using uniform labeling methods such as random prime, nick translation or in vitro transcription. Nucleotides labeled with high energy-emitting radioisotopes such as 32P are extremely sensitive and can detect small/low amounts of target DNA. Sensitivity of detection has also improved with advancements in autoradiography film emulsion and phosphorimager detection systems to significantly reduce exposure time. However, this comes at a cost, as one of the obvious disadvantages of radioactive labels, besides the safety and regulatory issues, is their short shelf life (in particular 32P).

Non-radioactive hybridization probes
It is not surprising that significant advancements in the speed, sensitivity and analytics (i.e. detection systems) of non-radioactive labels have made these methods rather appealing compared to their radioactive counterparts. Indeed, practical advantages such as increased probe stability, convenient handling and far superior safety profiles are of obvious appeal. Moreover, the use of non-radioactive labeling allows for the possibility of combining multiple labels in a single experiment, enhancing assay flexibility and efficiency, and improving detection systems and analytic capabilities for sensitivity and specificity profiles comparable to autoradiography methods.

There are two main types of labeling for non-radioactive hybridization methods: direct and indirect. As its name implies, direct labeling occurs when the reporter molecule is directly bound to the nucleic acid probe, thereby allowing immediate visualization following hybridization. This requires that the reporter molecule must not impede the hybridization reaction and must be able to withstand the harsh hybridization and washing steps. Examples include dyes such as fluorescein, rhodamine and cyanine, although many others across the UV-Vis spectrum are available. Advantages of this method are the speed of detection and ease of quantification. However, these dyes can greatly differ in their efficiency of probe incorporation, stability and size. Therefore, care must be taken to choose the dyes appropriate to the given assay. Additionally, some direct methods may be converted to indirect methods to enhance sensitivity if there are available antibodies targeting the reporter molecule.

Indirect hybridization methods utilize probes that require a secondary reporter molecule for visualization, often detected chemically or enzymatically by affinity cytochemistry. In this method, the reporter should not interfere with the hybridization, similar to direct hybridization, and the reporter must be accessible for antibody interaction. The most common indirect hybridization methods include hapten-based oligonucleotide probes such as digoxigenin and biotin. The former method utilizes antibody-mediated detection (described below), while the latter relies on the exceptionally high affinity of biotin to streptavidin for detection of the biotinylated hybridization probes to a streptavidin molecule conjugated to either a reporter enzyme or a fluorescent dye. These methods result in enhanced sensitivity as the secondary reporter molecules allow for robust signal amplification and greater probe stability. Thus, the ideal choice of label is dependent on the particular downstream applications and consideration of speed of detection, sensitivity and quantification.

Digoxigenin (DIG) labeling
This method is perhaps the most popular alternative to hazardous radioactive isotopes. Initially developed by Roche more than 25 years ago5 and with continued advancement and optimization, the Roche DIG labeling system provides state-of-the-art labeling to meet your hybridization needs. The DIG labeling method is based on a steroid isolated from the digitalis plants (Digitalis purpurea and Digitalis lanata) coupled with highly specific anti-DIG antibodies. In this method, digoxigenin is linked to uridine nucleotides at the C-5 position via an 11-carbon spacer. The DIG-labeled nucleotides can then be incorporated into nucleic acid probes by DNA or RNA polymerases at a defined density by various methods, including: random primed labeling, nick translation, PCR, 3'-end labeling/tailing or in vitro transcription. The DIG molecule can also by chemically labeled to nucleic acids via crosslinking primary amines (DIG-NHS ester) or covalent modification to a cisplatin derivative (DIG Chem-Link). Following hybridization, the DIG-labeled probes can be detected using high-affinity anti-DIG antibodies conjugated to a reporter (e.g. alkaline phosphatase, horseradish peroxidase, fluorescein, rhodamine or colloidal gold), or an unconjugated anti-DIG antibody can be coupled with a conjugated secondary antibody.