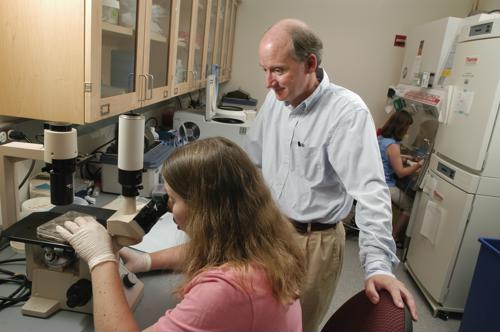 Proteins are critical target molecules analyzed in high-throughput assays for screening of small molecule and ligand libraries during the drug discovery process. However, working with purified proteins can be incredibly challenging and require significant investments in optimization. Proteins are susceptible to degradation and aggregation during purification and various experimental conditions, and therefore, can create a number of hurdles in larger scale assays.

Protein stability can also be greatly affected by changes in buffer pH, salt content, as well as various co-factors in the reaction buffer. As a result, optimizing protein stability during purification or prior to performing library screens can be significant for costs and productivity. This can be done with thermal shift assays, which are utilized for optimizing ligand and buffer conditions for enhancing solubility and stability properties, thereby maximizing protein stabilization during purification or other functional structural studies 3.

The thermal shift assay is a rapid and relatively simple technique that can be used to investigate protein stability via thermal denaturation. By monitoring thermal melting curves of purified proteins, thermal shift assays can be used not only to optimize buffer conditions during the purification process, but also inhigh-throughput methods to screen for potential ligands, peptides, cofactors, small molecules or drugs that affect the stability of a protein of interest.Identification of potential thermodynamic protein binding drugs is of considerable interest, especially for discovery of novel enzyme inhibitors as well as activators or allosteric ligands. Indeed, multiple studies have sought to identify protein stabilizing drugs using thermal shift assays 1,2.

In thermal shift assays, changes in the thermal stability of protein-ligand complexes or buffer conditions relative to the reference sample is monitored by thermal melting curves, thereby allowing for quick screening of promising ligand interactions and/or buffer conditions warranting further characterization. This is done by comparing the shift or change in melting temperature (this is defined as the temperature at which 50 percent of the protein is unfolded) between various assay conditions to the reference sample that either function to stabilize or destabilize the protein of interest. Thus, an increased Tm is associated with conditions favoring protein stability, while a decreased Tm favors protein destabilizing conditions (i.e. protein denaturation).

In these methods, fluorescence signal increases as a function of temperature in the hydrophobic environment produced by unfolding protein during thermal denaturation and plotted along a sigmoidal curve. Thus, with enhanced sensitivity in current assays, very small starting amounts of protein are required compared to older thermal shift methods, now requiring only ~1-15 µg per sample.

Thermal shift assays have become an efficient screening assay for analyzing protein stability, including the determination of optimal buffer conditions as well as identifying ligand and small molecule interactions. Importantly, thermal shift assays are simple to set up and fast to perform, with typical run times ranging from 30 to 120 minutes depending on the detection system and assay parameters. Indeed, Roche has developed a first-in-its-class high throughput system for thermal shift assay screening using the Roche LightCycler® 1536 real-time PCR system 4.

This fully automated platform is the first 1536-well PCR instrument capable of performing thermal shift assays. Additionally, the LightCycler® 1536 real-time PCR system uses proprietary Therma-Base technology (common to all LightCycler® instruments) allowing for quick heating (up to 4.8 degrees Celsius per second) with uniform temperature distribution across the block and without time delay prior to fluorescence detection of the plate. The technology is scalable from 96/384 well on the LightCycler 480, up to 1536 well on the LightCycler 1536, allowing for extremely stringent correlation of data in different throughputs and reaction volumes across platforms.

Together, these factors optimize the sensitivity, speed, and accuracy of thermal denaturation detection, thus allowing researchers to increase throughput while reducing the amount of starting material and reagent used in the reaction, which can significantly increase yield and cut costs.